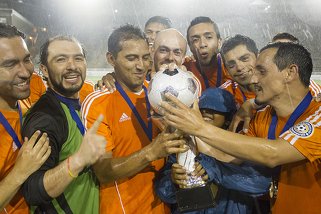 For the first time this summer, the Canadian Corporate Soccer League (CCSL) will host the Coed Division 1 - 11x11 final on Sunday 12 August 2018 at the Percival Molson Stadium. Traditionally the CCSL runs their most competitive divisions on the BIG FINALS DAY - but, this year the league is integrating an important element of its summer divisions - Coed.
"The league is constantly evolving," says Albert ZBILY, president of the CCSL, "it is important to show the values of the league not only to be competitive, but also to be more inclusive. Our coed divisions offer just as much, if not more, entertaining games than any other division".
Coed 1 division moved to play at the Molson Stadium instead of its usual home of Forbes field. The Division has evovled over the years, as more competitive teams started to join the league.  Traditional favourites of the division are being challenged with new rivals Transat joining the division for the first time.
"We are here to represent our company and our diversity - but, we will give it all we have to put up a trophy at the office," said Transat captain Jorge Castillo.
Other finals to watch will be the Friday night Division 2 with new teams such as Chikoun FC and fan favourite Division 1 - with 8 teams competing this year for the title.  Premiership will round off the marathon day with the classic final we expect every summer.
The CCSL hosts a BBQ during this day, thus making it a family day for all to attend and watch the soccer festivities.  As usual, the CCSL will offer prizes and the grand prize of a GSM Tablet to give away during the day.  Entry is free and encouraged to come with friends to enjoy all the soccer action.
Kick off is on Sunday 12 August at 3pm.