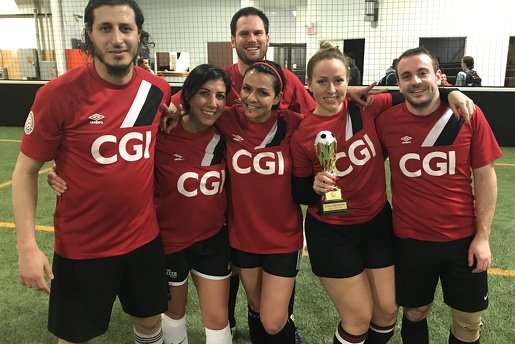 In a stunning upset, CGI out played BMO United FC to take the final of this past winter’s Champions League final.  BMO United FC had a perfect record coming into the final without losing one game throughout the winter season.

“We are thrilled at this great opportunity,” said CGI FC captain Christina Leclerc after hoisting the Champions League trophy at Stadium5.

This first world edition of the Corporate Champions Cup will be played in Montreal with the aim of having this tournament move to different countries around the world.  The CCSL is thrilled to be hosting this first edition.

The World Corporate Champions Cup will be played out on 29, 30 June & 1 July 2018 at the McGill Percival Molson Stadium – tickets are now on sale and members of the CCSL can benefit from a $5 discount – don’t miss this opportunity to be part of Corporate Soccer history.