CorporateSoccer Loses One of its Own 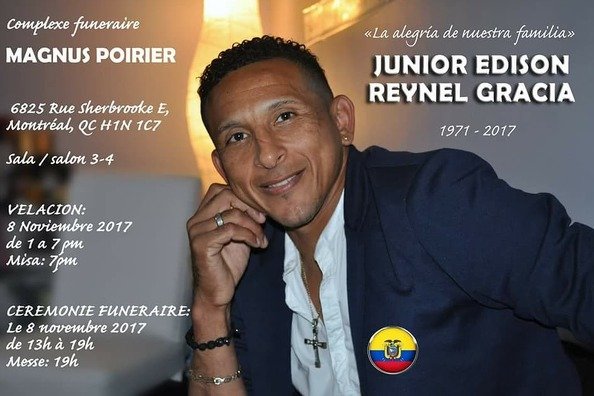 The Canadian Corporate Soccer League (CCSL) announces with great sadness the passing of one of its own – Mr. Junior Edison Reynel Garcia.  Junior, as he was so affectionately called by his teammates, played for Sky United FC .

“It’s a sad day for CorporateSoccer in Montreal,” said Albert ZBILY, President of the CCSL, “Junior was an excellent player who showed leadership and integrity on and off the field. He was a mentor to the younger players and motivator to his peers and cohorts.  He will be deeply missed.”

Junior leaves behind his kids and his grieving wife, but equally a devastated family and friends. “I am speechless,” said Mike Traian, captain of Sky United FC, “we just finished the summer season together and defended our title for the 3rd straight year with his help, I lost a very dear friend today”.

Junior, 46, lost his life after complications developed from surgery.  His family will receive condolences at the Magnus Poirier Funeral Home (6825, rue Sherbrooke East) on Wednesday 8 November from 1pm to 7pm.  The Corporate Soccer Foundation will make a contribution to the charity of the choice of the family.