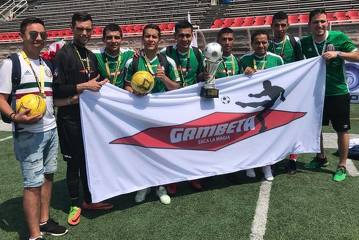 The Canadian Corporate Soccer League (CCSL) was proud to be represented by CGI FC during the first FIFCO World Corporate Champions Cup that was held in Montreal during Canada day weekend.

In what turned out to be an exciting soccer festival for 16 corporate teams coming from 16 different countries, this first edition is only the first step towards a new worldwide tournament to celebrate corporate soccer on a global scale.

The Mexican representative team, Gambetta 7, defeated PDO from Oman in a stunning 5-1 victory.  “The score doesn’t do justice to how hard these players played and the amount of spirit went into these two days of matches,” said the president of FIFCO, Albert ZBILY.

“This was a very exciting event, one with much competition, excellent networking opportunities, and a fun Saturday night dinner with dance and singing,” said Christine Leclerc, captain of team Canada from CGI.

The three-day event was organised in conjunction with the CCSL and featured a 5v5 format at the McGill Percival Molson Stadium. Participating countries fielded teams from their respective corporate leagues and played in an initial round-robin format with the top two teams of each group advancing to the second round of the tournament.

While Oman and Mexico battled the final, Egypts’ SportXGlobal and Italys’ Sportland battled the 3rd place game with Sportland taking the edge by a score of 6-4.