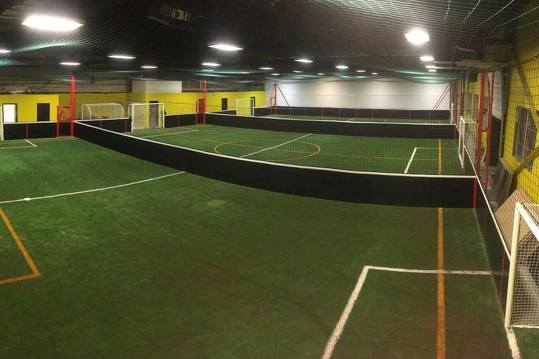 The Canadian Corporate Soccer League (CCSL) in Montreal, launched its 9th winter season this past week in a new soccer complex in Montreal.

“We are quite excited about being at the new centre,” said Albert ZBILY, President of the CCSL. “This is the first time that the league offers a Footy5 version of corporate soccer.”

Footy5 is the latest fad to hit this side of the ocean – originating in Europe, the Footy5 concept is to play on a small-sided turf field, while using the walls as a playing field.  This 5 on 5 version of indoor soccer is extremely popular in Europe and it has recently hit the shores of Montreal.

“With the high numbers of European players playing in the league, it was only a matter of time that we would have offered this type of playing surface” said Mr. ZBILY.

“We believe in bringing a whole new dimension to the soccer market in Montreal,” said Marc Ameti, of Stadium5, “once people try our small field, they will all understand the beauty and the difficulty of this game,” he continued.

This winter the CCSL is offering 9 divisions of 7v7 and 3 divisions of 5v5 at the new Stadium5 complex in Montreal.  This winter also represents another first for the league, in that the winner of this winter’s Corporate Champions League will represent Quebec in an all-out battle for the National championships to be held in Montreal in April 2018.

Good luck to all the participants in this winter’s championship and may you all do us proud at the national level.