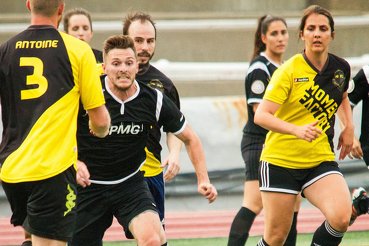 KPMG 2 vs Moment Factory, Molson Stadium summer 2018
The Canadian Corporate Soccer League (CCSL) is proud to announce its 12th summer season this summer at the McGill Molson Stadium. The CCSL is Canada's largest independent corporate soccer league featuring some of the largest and most important company's in Canada.  "But don't forget the SME's and the little guy," said Albert Zbily, president and founder of the CCSL.  "I am always amazed on how companies, employees and even small business want to encourage a basic fundemental - which is exercise," he said.

The CCSL will start attempting to offer more targeted divisions to focus on increased networking opportunities for all companies involved.  Playing within the same trade has its advantages and allows companies to network within their industry but at the same time embrace the values of exercise. Wednesday nights at Forbes Field, will feature an exclusive advertising/publicity division, featuring some of the most important firms in the city competiting to be crowed champion.
"We would also like bring back some of the more recreational levels to the Sunday afternoons," said Albert, "there is something quite satisfying in spending a Sunday afternoon with your kids and playing soccer at the Stadium."  The CCSL is looking at brining back its classic Sunday recreational 11x11 division to encourage young and "older" alike to come out and enjoy a Sunday at the park.
Azmi Khia, the new referee assignor is also bringing a greator rigour to the refereeing department.  "Through our survey's we have realised that people are upset when officiating is poor, or not properly handled.  I think this is a fair assessment and we will attempt to weed out those that are not up to our standard," said Azmi.

The CCSL is the only league affiliated to the International Federation of Corporate Football (FIFCO) and this year the World Corporate Champions Cup will be held in Marrakech, Morocco - one lucky winning team will get to travel to represent Canada and their corporate team.

Spots are now available, sign up now before all the good spots are gone.  http://www.corporatesoccer.ca/en/page/summer_2019.html