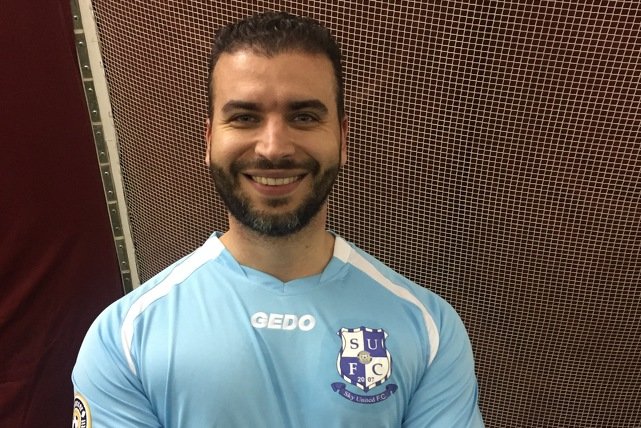 Every player in the league receives a FIFCO passport ID, which represents their registration

– Nazim registered this past Friday and came in at #10,000.  “This is an important milestone

for us,” said Albert ZBILY, president of the CCSL, “this is a culmination of 10 years of hard

work, dedication and perseverance of building a corporate league in Montreal.”

Nazim, born in Algiers, comes to Montreal via France on his way to a new adventure.  Looking

to practice the sport he loves, “what a great honour, this is nice news for me” said Nazim who

plays left back for Sky United FC 2 of the Coed division 4 on Friday nights. “In France we don’t

play coed, this is a nice change and I find it quite pleasant since the pressure is off – we are

all here to have fun,” he continued.

has played soccer in his native France since he was a child. As a big supporter of Olympique

Lyon, soccer is not only a passion, but a way of life. “I feel very lucky to play with Sky United,

as it is the most successful club in this league history,” he said.

“I am not a superstar, but I like playing left back, I also like the chemistry on this team. There

is a lot of potential to get to the end,” Nazim added.  “In the short time that I am here in

Montreal, this is by far the best organised league with a great ambience” he shared.

As the winter sets in, we wish much luck to Nazim and his teammates for this winter

championship, “I am confident we will end up on the podium this season,” he said with a

of the Canadian Corporate Soccer League, Canada’s largest corporate league of its kind.