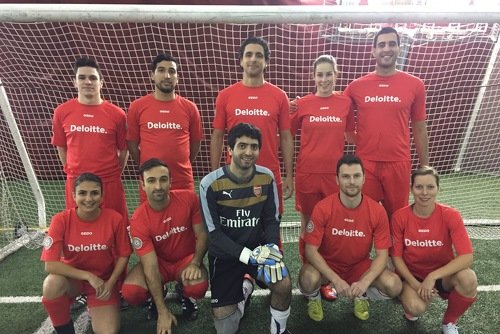 Deloitte FC - Winter 2017-18
The Canadian Corporate Soccer League (CCSL) is preparing for another indoor winter season - the 10th year to be precise.  The CCSL has been running an indoor 7v7 programme since the innugural 2009 launch of the Concordia Stingers Dome.  This upcoming winter is no different, except the CCSL is excited to announce some new features.
"It is always a challenge to prepare a new season," said Albert Zbily, president of the CCSL, "but, we are excited to be introducing some new features." The CCSL will test a weekly game to stream on Facebook Live.  The model is increasing in momentum with several leagues around the world.  Corporate soccer in other jurisdictions have been running some live feature games online and have received some good results.
The CCSL will also attempt to run a regular happy hour so as to increase the possibilities for networking amongst the teams.  "Everyone is busy, everyone has a life to work, play and have some private time, but we all need to increase our networks, and the league is a great place to do it," Albert says.
The CCSL is promoting its 5v5 option using a high-grade turf field at a central location in Montreal.  As 5v5 increases in popularity amongst corporate leagues world wide, it is a vital part of the growth process that we start transitioning teams onto the 5v5 format.  The fastest growing segment of soccer around the world, the CCSL has access to the newley established Stadium5 just off the airport highway - with access to a resto/bar for after game festivities.
The league has already announced several divisions being fully booked and sold out - but, other divisions in the 5v5 and in 7v7 formats remain available.  Early birds will get the best choices - so don't delay to sign up your team.