On the road to the World Corporate Champions Cup 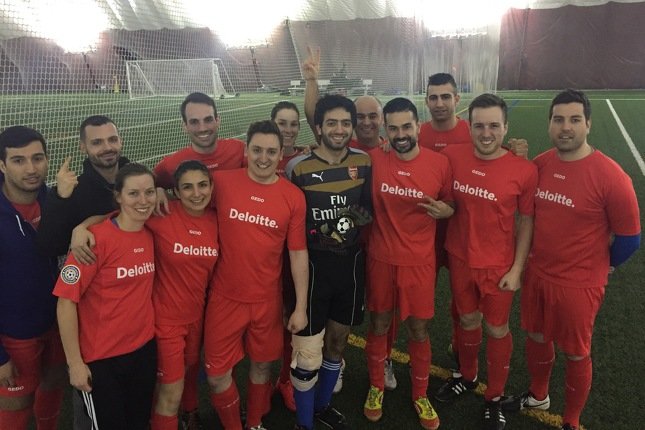 There are few opportunities in life that come only once – this is one of them. The International Federation of Corporate Football (FIFCO) announced their first World Corporate Champions Cup to be hosted in Montreal in 2018.  This exciting opportunity will see up to 16 nations produce their best corporate soccer teams to compete for the ultimate title.
“This is a unique opportunity for us, in the sense that we will showcase to the world what Canadians are capable of doing in the soccer world,” said Albert ZBILY, president of the Canadian Corporate Soccer League (CCSL).  During the course of this upcoming winter season, corporate teams from across the country will have the chance to compete in their respective cities, with a chance to compete at the national level.
The CCSL is planning on holding mini-tournaments of 5x5 throughout Canada during the winter season in order to crown various Canadian winners.  Winners of the tournaments scheduled to be in Toronto, Calgary, Vancouver and many other Canadian cities will each travel to Montreal in April for the grand finale of the Canadian Corporate Champions League.  The winner of this 5x5 tournament will be crowned the Canadian Champion.  This Championship team will represent Canada at the World Corporate Champions Cup in 2018.
“This is the first time in our history that we attempt to pull off such a large feat,” said Albert ZBILY. “I believe that this will be our culmination to respectability in the soccer world. Corporate Soccer is a serious game – we emphasis our core values through this beautiful game.”
The CCSL is now finalizing details for tournaments in various cities to be held throughout the winter.  For participation information – contact the main office of the CCSL - 1–888-855-2295