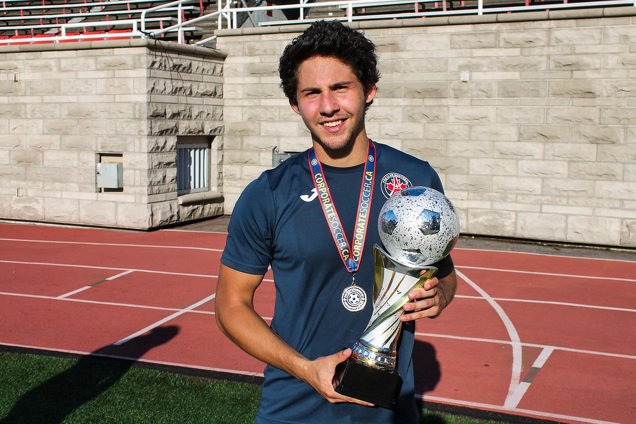 Wendler:  First of all, congratulations for winning the championship in Division 2. Your team performed very well against Athletico de Montreal.

David: Thank you. It was very challenging for us. Our opponents absolutely deserved to be in the 2017 CCSL Playoff Final. They put a lot of intensity into the game. I am so glad that we were able to keep the upper hand during the penalty shootout.

Wendler: Generally speaking, what impact has soccer in your life?

David: I have been playing soccer since I was little. When I was living in France, I decided to join a club in Clamart, a small village in the south-west of Paris. Former French national player Hatem Ben Arfa grew up there for instance and eventually became one of the biggest talents in the whole county.

Wendler: Was it hard to pick up your playing career once you arrived in Canada?

David: No, not at all. Luckily, I was able to find a good club right away.

Wendler: How would you describe playing for PSG de Montreal?

David: It is really an amazing group. Everyone wants the team to succeed and put a lot of effort into it. At the same time, we are all fiends. It has become a tradition that we hang out after the games and drink a couple of beers together. For me it is more than just a team.

Wendler: What is your step with the club?

David: We have to focus on winning the indoor winter league of the CCSL as fast as possible. I know that a lot of teams are just waiting for another opportunity to beat us.

Wendler: What about next summer?

David: If you are the champions, then you want to defend your title by any means. Maybe we can also move up into a higher division. The Premiership might be interesting for us.

Wendler: Alexis, thank you for this interview.