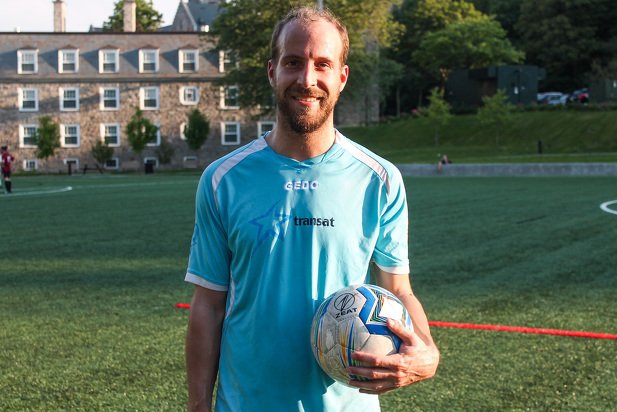 Wendler: Laurent, you were playing for Transat in the COED Division 2 this summer. Despite ending up in sixth place, you all seemed to have enjoyed playing with each other. Is that right?

Dumais-Venne: Yes, absolutely. Since everyone on our team is working for Transat, we were happy to spend some time together on the pitch. I know most of the players, since I work with most of them during the day. It’s funny, I see them every day from nine to five, but it helps to build a good chemistry on the team.

Wendler: How would you describe your role in the team?

Dumais-Venne: I am midfielder; I have basically two jobs to accomplish. I need to stabilize our game and create opportunities for our strikers. This is also the reason why you hear me talking a lot when I am on the field. I try to be a leader, even if I am not the captain of the team.

Wendler: Did you have some personal objectives throughout the season?

Dumais-Venne: No, I was not really chasing individual records to be honest. For me it was more important to be successful with my team. But I will not deny that it still feels good to score a goal from time to time.

Wendler: Do you feel nervous on match days?

Dumais-Venne: If you like soccer, you always get those thrills before a game kicks off. You want to prove yourself and to keep contributing to those small rivalries that have built with other players in the league.

Wendler: Was it challenging to play in the COED Division 2?

Dumais-Venne: The level amongst the teams was a bit uneven in my opinion. You never really knew exactly what you were up against. Some of our opponents had fantastic players in their lineups. They all deserved to fight for the title. I hope that we can close the gap to the four top teams as soon as possible. We are much better than the ranking we finished with.

Wendler: Being consistent was one of the biggest issues of Transat in the course of the last season. Would you still consider the season as a success?

Dumais-Venne: Playoffs or not, we are very satisfied with the season. Our main goal was to have fun in the Canadian Corporate Soccer League (CCSL). There are some things that we have to improve for next year, but we can definitely build on our performance of this summer.

Wendler: Laurent, thank you for this interview.