Summer Season 2019 Closes on a High 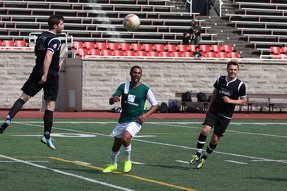 In a stunning fashion, this season has been dubbed the year of the underdog.  KPMG FC, the returning champions in the Coed 1 division was upset by rookie team BNP Paribas in their inugural season at the Canadian Corporate Soccer League (CCSL).

"The finals day is when all the big action occurs," said Albert Zbily, president of the CCSL, "its exciting to watch as all the teams who worked so hard during the summer, get to see the fruits of their labour."

This summer, the CCSL saw an increase in their overall numbers with new teams and new divisions. "But, we do have our share of problems," said Azmi Kahia, head assigning referee, "teams are quite skilled in the game and require very close attention by our referee staff."
Every summer the CCSL attempts to bring on board new teams and new divisions. Learning from previous year's surveys, the CCSL always attempts to correct previous errors in league management and delivery. "Our biggest challenge is always to make sure we have access to fields and qualified officials," said Albert, "we try very hard to learn from our mistakes and attempt to deliver an improved quality, year over year -- its never easy!"
A total of 18 divisions participated this summer with 18 finals played. Every team gives it their all to play and to win, several divisions saw some major upsets with 4th place teams winning their respective finals. "Its an amazing thing to watch, dissapointing for the first place team for sure, but incredible to see an underdog win the title," said Omar Toauzere, head match delegate.

Some of the winning teams included rookie teams such as Equisoft, Mer Noir, SSENSE and underdog teams such a Beyond Technologies, BNP Paribas, EBC, PSP and many others.  An incredible finish to what was a very hot summer in Montreal.
The league has definitely improved over last year and is now in the planning phases of introducing new events, new teams and new features to come out in 2020. The CCSL, true to its nature, is focusing on building on the various trades already playing in the league and improving the overall championship.