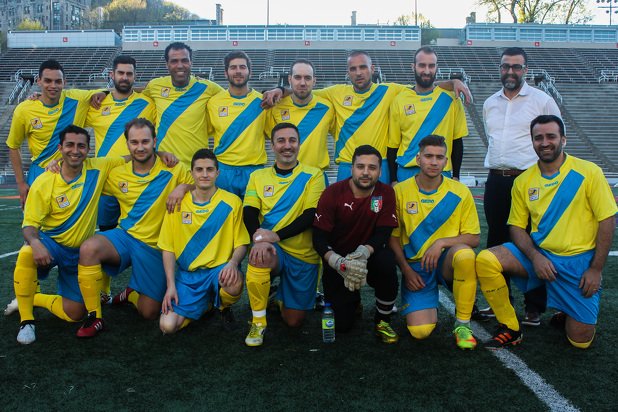 Mifalot Canada FC, plays with the colours of the Canadian arm of the international Israeli charity promoting peace with its neighbours through the game of soccer.  This team was one of the biggest surprises in the Premiership this summer. After a decent start to the season, the rookies managed to take the league by storm. Only a narrow loss against the number one seated team FC Desjardins stopped these fine athletes from getting into the playoff final.

The Premiership is usually not the right place for teams to make the first steps in the Canadian Corporate Soccer League (CCSL). Many players had to learn this painful lesson already in the past, while trying to get a foot in the door of the elite division. Mifalot Canada FC, was promoted to this summer’s Premiership after winning last year’s division 1 title. The team formerly known at International United FC, seems to be an exception to the rule. The rookies surprised their competitors by playing a hard and aggressive defense during the summer. "We have a lot of talented guys in our lineup. Our main problem is that we still need to figure out how to be more effective when we are on the pitch. I think it will be a work in progress for the team", said Shlomi Levy, the team captain, openly in an exclusive interview with the CCSL.

The 41-years old tax lawyer was appointed captain before the season officially kicked off. His teammates trusted him to use his vast experience, in order to help the other younger players see the bigger game. Mr. Levy managed to live up to the expectations almost instantaneously, even though he is trying to not make a big deal out of his new role. "Most of the players are long-time friends of mine, which makes it really easy for me to motivate them. The important thing is to keep cool and just be respectful of everyone. If you start to drill down a message game after game, people buy in", said Mr. Levy, who is a former player for Hapoel Bnei Lod FC in the second division of Israeli professional league in the late 1990s.

The loss against FC Desjardins in the 2017 Premiership semi-finals might have been hard to swallow for Mifalot Canada FC. But the truth is that it does not take away anything from what can be considered to be one of the greatest rookie seasons in the CCSL. If captain Slomi Levy is able to keep his players focused on the upcoming challenges, Mifalot Canada FC will maintain the status of a serious contender for the title in the Premiership. "Of course, we want to win the championship trophy, but we have also to be realistic. Sky United FC and FC Desjardins are two tough teams to beat right now ", admitted Mr. Levy. "However, if we can achieve our first objective, which is to have fun, we can play an important role in the next few years."

Apart from winning the title in the Premiership, Mr. Levy is chasing only one big goal: Playing a full game. "My personal statistics do not matter to me anymore. I just want to support my teammates as well as I can. My knees would prefer to play on natural grass, because it would mean I can stay longer in the game. As a midfielder, sliding tackles are part of your job description, but on a hard underground you will feel those bruises in the morning ", admitted Mr. Levy laughingly.

Good luck for the next seasons in the CCSL, Mifalot Canada FC.