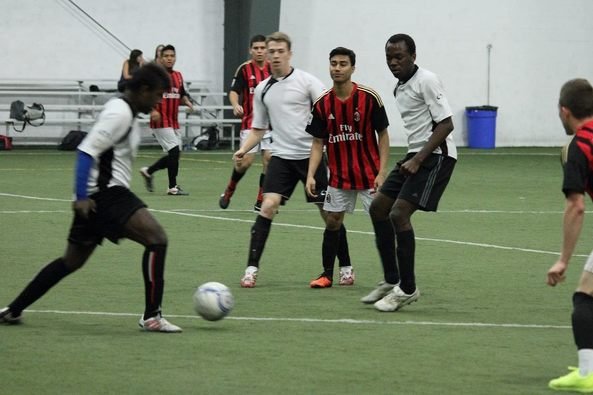 The Canadian Corporate Soccer League (CCSL) is ready to launch its 9th winter edition – corporate soccer teams will be able to compete for the first time on a turf 5x5 field. With 15 winter divisions to boast, Corporate teams will be competing at all levels of the game.
The flagship Premiership division has shifted to Monday nights at the Concordia University Stingers Dome, while the very competitive Division 1 has shifted to Monday at the same location.  There will be 4 coed 7x7 divisions this winter, with an entry-level division played at the Stingers Dome on Friday nights.  The entry level mens divisions will be played under division 3 & 4 on Friday nights, with a small pre-season placement tournament held on Friday 3 November.  The placement tournament will allow the stronger teams to play together in division 3, while the other teams will compete in division 4.
For the first time in the CCSL, 5x5 Footy soccer will be played at the newly built Stadium 5 Multi-sportsplexe in Montreal.  This new facility which boasts 3 state-of-the-art 5x5 turf fields, is the only one of its kind in Canada.  The Spanish company who built the field is also responsible for building the same facility in Barcelona for famed player Jordi Alba.  This new facility will allow the CCSL to run competitive and recreational 5x5 footy in the facility and allow for the sport to grow within the corporate soccer community.
“This new facility will also be home to the first Canadian Corporate Champions League which will be held in April 2018 with teams from across the country coming in to have the chance to win a seat at the first World Corporate Champions Cup,” said Albert Zbily, president of the CCSL.
Registration is on-going and corporate teams wishing to get into this winter’s championship must hurry – there are limited spots open for new and returning teams.  “Teams are urged to react quickly,” said Mr. Zbily, “the buzz around the World Corporate Champions Cup has made it such that teams absolutely want their chance to win.”
For more information on joining the league – contact the HQ at info@corporatesoccer.ca or call 1-888-855-2295